When You Get Too Big for Your Kitchen Table 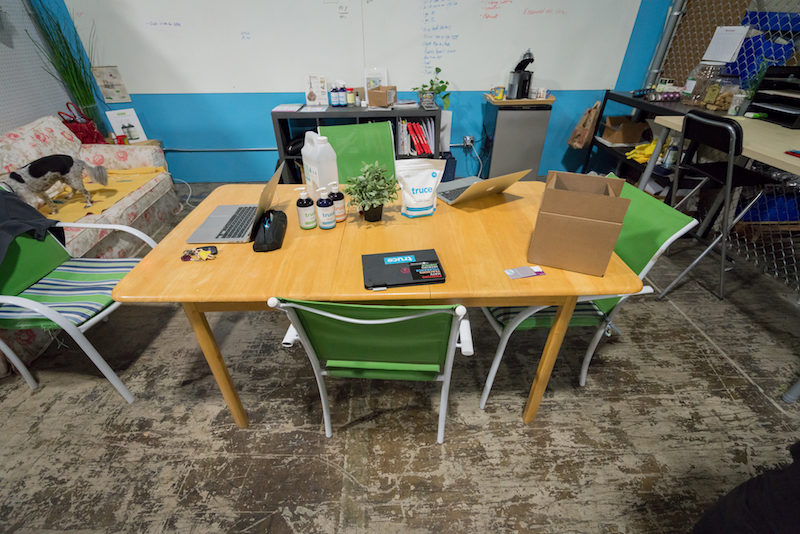 Surrounded by the profusion of young web development and SaaS companies that dot the Phoenix Metro landscape, it’s easy to miss the extraordinary entrepreneurs who satisfy their creative spirit by manufacturing tangible goods. We have all become so adept at buying things on Amazon, but we can easily overlook the simple fact that someone had to make them.

A human being, at some level, interfaces with everything we purchase or consume.

Now, one could argue that the over-abundance of “stuff” we have access to online has made it really hard for locally-manufactured goods like glassware, candles, or cleaning products to hold their value against goods produced overseas.

But I’m an optimist and believer in the grit and determination of homegrown manufacturing. Things like city codes and regulations can often present hurdles that even really smart manufacturing entrepreneurs can’t get over. And before that, when they’ve outgrown their kitchen table or garage but can’t yet afford a giant warehouse, their options have traditionally been limited.

When we started a co-manufacturing space in Tempe, it came from a place of vision – we wanted to give hungry manufacturers an in-between option so they could go from their homes to something just shy of their own building. We wanted to provide a space where they could grow their businesses and develop a mutually supportive community at the same time. We didn’t know if it would work, but one of our earliest tenants proved the concept through their success.

The Moment of Truce

Like many other manufacturing startup journeys, Truce’s story began at a kitchen table…with a mission. Kandie Konomos, Truce’s original recipe master, developed contact dermatitis after using cleaning products, which were chock full of toxic chemicals and agents. Kandie knew there had to be a better way, so she began experimenting right at her kitchen counter.

Along the way, Kandie met and partnered with a champion for her cause, Diann Peart. Combined, the two were a powerhouse of passion and within a year of making its first public appearance (under a different brand name), the company’s first generation of cleaning products were featured at Whole Foods Market in 2009.

Like so many seedling manufacturers, the tiny Truce team did all they could to produce enough product from their kitchen table to keep up with demand. Fortunately, by April 2016, the kitchen couldn’t sustain the momentum the team built. Their good fortune landed them in a spot where professional manufacturing space was a must. But they weren’t yet at a place where buying or renting a whole industrial building made financial sense.

From Kitchen to Co-Manufacturing

When they found our co-manufacturing space in Tempe, it was so much more than just a fit for their space needs. It was a really convenient location for the Truce team, but it also provided access to a community of other manufacturing companies that were in a similar stage of growth. This was huge for Truce. There was a built-in peer support group, great networking opportunities, and we (MAC6) were a resource for them to use during and after their transition to their new home.

And that home quickly grew…again. At first, Truce only needed 130 sq. ft. of administrative space at our co-manufacturing facility – a step up from the kitchen. But within months, the Truce movement picked up additional steam and the team needed a bigger physical space to accommodate more than just the administrative side of their business.

Without disrupting operations and moving to another location, Truce was able to expand their footprint under the same roof. We helped them add nearly 1,000 square feet of additional space seamlessly. They also increased their shipping and receiving frequency and quantity easily by having convenient access to our loading docks.

Cashing in on Community

With such quick growth, even the most seasoned entrepreneur knows the challenges that come with this kind of success. For Truce, taking advantage of the connections fostered within the MAC6 co-manufacturing and coworking community paid huge dividends. It not only helped them find some raving fans of their products, but also allowed them to access people and companies who had deep knowledge of things like clearing ecommerce hurdles and developing marketing strategy.

They didn’t have to operate in a vacuum or in the cold confines of a soulless industrial space.

Truce found a valuable community, made important connections, and realized the benefits of a flexible co-manufacturing space when they found us. We’re certainly not responsible for their growth and success, but we’re really happy we’ve played a part in their mission-focused story.